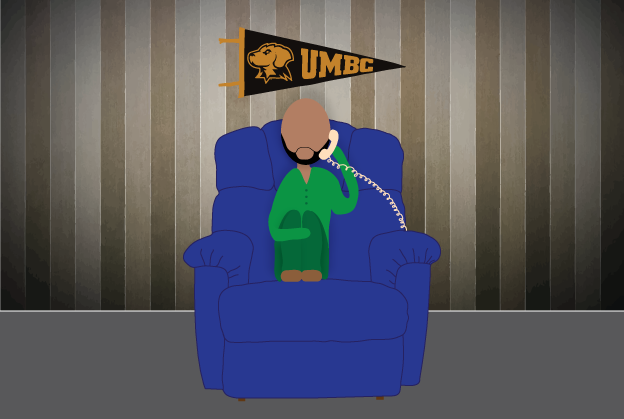 As I reclined in my favorite chair, a blue La-Z-Boy, I cradled my seventeen year-old self, dark green pajamas draped over my skeletal body: a pathetic, daylight-starved assemblage of inertia which rattled with a rheumy cough every few minutes. The daylight that streamed through the living room’s windows was of little comfort. I’d missed school for a week, and this episode of absence was hardly the kind of staycation that recharged one’s mental health. I was too tired from coughing to do much beside stay in that chair, flipping channels and waiting with dampened breath to see whether or not Rufus and Trenae would really break up or if Dolly-Ann would find out who her real father was next time on Maury, or Jerry, or Ricki, or whatever.

When the phone rang, I wearily picked it up.  It practically a dumbbell for my enervated arms.

“Hi! May I speak with Samuel, please?”

“I’m sorry! Well, I don’t want to take up too much of your time. I’m calling from UMBC.”

I’d applied to the University of Maryland, Baltimore County along with six or so other schools a few weeks earlier. I was not terribly organized in my application process: had a friend not asked me to proofread his essays, I may well have never started my own.

Since I was little, I’d expected to go to the University of Maryland, College Park, the state’s flagship institution. This is what “college” meant to me. It’s where most of my peers applied to school and where my dad drove me when I was younger to give me a preview of what would await me if I worked hard and stayed out of trouble (my record ended up rather mixed on both counts — ignore my sophomore year). The other schools I applied to were all backups, in a way; I had the grades for easy admission in all of them. UMD was the only iffy proposition according to official statistics. All I knew about UMBC was that it wasn’t College Park.

“Well, we were looking over your application and thought that you’d be a good fit for our Public Affairs Scholars program. Are you familiar with it?”

I indicated an interest in Political Science major, having recently become obsessed with The Washington Post and American political history. I’d volunteered on a couple of local campaigns and worked at a campaign tent at the Montgomery County Agricultural Fair.

“It’s a small group, no more than 20 students a year, who all major in public service-related fields. It sets up internships and service work for you to do, you go on field trips and other excursions together. There is a scholarship attached — half or full tuition room and board,
and-”

“Yeah! So all you have to do is submit the application. It’s only two pages long. As long as it’s postmarked by the 20th, you’ll be fine.”

I thanked her for the call and slowly pulled myself off of the chair.

I was mostly shocked that 1) someone actually read my application and essays 2) they read carefully enough to then approach me with what sounded like a perfect opportunity. I got to writing.

My health had improved markedly by the time I first visited the UMBC campus. I wore my light blue shirt and khakis to a series of meetings about the Public Affairs Scholars Program, for which I was invited to interview after submitting my hastily assembled application.

I met several of the other candidates in a large room where some of the current students told us about their goals and experiences. At least two of them had ambitions to serve in public office someday and were semi-seriously haggling over who would head their gubernatorial ticket in 2022. Regardless of who would head to Annapolis first, they were both clear about the opportunities students had here, right next to Baltimore, just under a half-hour from the state capitol, and just over a half hour from Washington, DC.

I was impressed not only with these students’ accomplishments but also by how normal they seemed. I had an image of college students as constantly fatigued from schoolwork or incredibly socially awkward types. The students I met were from counties in Maryland I’d never even been to before, but they didn’t feel all that different.  More importantly, I didn’t feel overwhelmed or out of my element.

When it was my turn to interview, I sat in a small room with a political science professor, a sociology professor and a current member of the Scholars Program. It began with formalities and introductions, which were pleasant enough. We began debating the the dot.com bust and merits of the Lincoln presidency. It was a lively discussion; I enjoyed engaging directly with these topics with a professor — was that even allowed? The more experience I had with UMBC, the more it seemed like a place that fostered students’ ambitions and provided real mentorship for them.

Several weeks after that, I received a promising Big Envelope in the mail. Inside was a letter of congratulations and confirmation that I’d been selected to join the 2006 Sondheim Public Affairs Scholars cohort with a full scholarship behind me. I jumped for joy-I was off of the La-Z-Boy and out of my green pajamas — I was college bound.