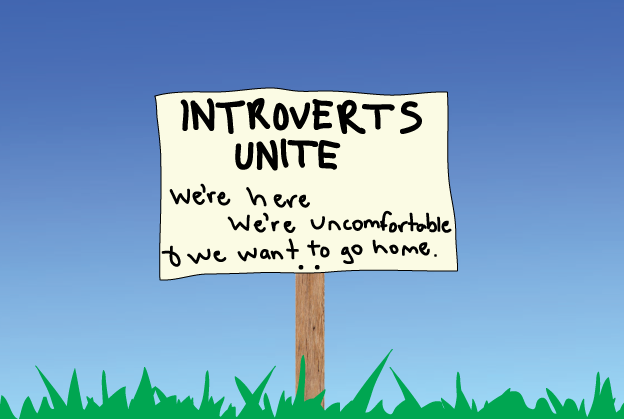 This is a shout out to all the introverted students. You probably already know who you are: you enjoy being alone and “living inside your own head.” Being around groups is draining, and talking to people you don’t know very well can be exhausting.  Maybe you’ve been told, by parents or teachers, that you’re a daydreamer and that you should work on being more outgoing.

The truth is, it’s not easy to be an introvert in an extroverted world, and high school can be one of the most extroverted places of all– popularity will never feel as important as it does right now. High school is rife with groups, clubs, and class trips. There’s very little privacy or quiet to be had in a school day, either. But, as an introvert who has been there and lived to tell the tale, I can tell you this with absolute certainty: you’re going to be just fine.

When I was in high school in the early 2000s, “introvert” wasn’t a common word. Shyness was a blanket term for the less outgoing among us, and it was seen as a major problem in teenagers, just one step away from (gasp!) antisocial behavior. I was “shy” because, while I enjoy being talkative with a few people at a time, I tend to listen and think in large groups (like a classroom), and I find it tiring to be in social situations. I don’t dislike other people at all! I just need some time by myself to recharge. For as long as I can remember, a full school day – where classes, conversations with teachers , are punctuated by times where you talk to your classmates – wore me out, even though I loved learning and being with my friends.

When I got to high school, dozens of people – family, friends, teachers, and, once, a very well-meaning lady on a bus – told me, fundamentally, that being outgoing was a choice, and that I should “put myself out there” and hang out with as many people as I possibly could in the next four years. What was never mentioned, but was invariably implied, was that if I didn’t learn to be popular in high school and, not just accommodate, but genuinely enjoy being around lots of people, then I would never be successful in life. Obviously, I didn’t want that, so I tried as hard as I could.

In September of my freshman year at a hip new prep school in Vermont, I spent a mandatory “team-building” week in a yurt with 20 other students, all of whom I’d just met.  No electricity, no watches, no phones, and no entertainment other than our journals, the woods, and each other’s company.  Since we were in such a remote area, we were on a 24/7 buddy system- there was no privacy to be had, not even on a trip to the outhouse. I tried my best to be excited, to speak up, and to ask other people about themselves. I was determined to crush this outgoing thing- no one else knew it, but I was going to be the belle of the ball-or, rather, the belle of the yurt.

By the end of the trip, I’d gotten to know a few people a little better, written a LOT of morose poetry, and felt so profoundly overstimulated that it took me three days of hermetic isolation to feel like myself again.  Whatever social experience I’d gained was completely overshadowed by feeling emotionally exhausted, weepy, and with a notebook full of Poe-esque haikus about autumn leaves, baby moose, and the glorious silence of the oncoming winter as my only souvenir. It was then that I realized that that the “fake it ‘til you make it” method was going to lead to frayed nerves and fewer chances to really connect with anybody.

I learned about introversion soon after that. Knowing there was a word for how I was-and that there was nothing wrong with me-was incredibly liberating. Once I knew it was normal for me to feel drained after school, spending the day elbow to elbow with even my most chatty classmates became less exhausting. I got permission to chill in a classroom during lunch if I needed some time to myself. I honed my listening skills and asked other people questions.  I discovered that, even if I wasn’t great at a party or in a group debate, I found one-on-one conversations invigorating, a love which fuels my passion to help dozens of high school and college students in my work today.

It was still hard, but it got so much easier after I accepted that I was quiet. I made wonderful friends, thrived at a university that had more students than all the people in my hometown, and succeeded in every way I had been warned I might not, being a proud introvert all the while.

One of the scariest things I did in high school was to trust that I would be liked and valued by my peers even if I wasn’t a social butterfly. But I was, and I continue to be.  Everyone, extrovert and introvert alike, will benefit from pushing their boundaries during high school, but knowing and honoring who you are is just as important.  So to you, dear introvert, I say, from a distance and in writing, that I know you will find your way.