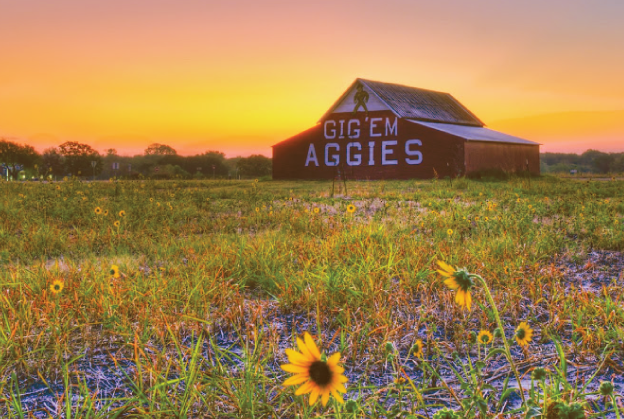 Want to be a real Aggie? Pen and Prep has you covered! Alison H., Cram Crew’s fabulous designer and TAMU grad, shares all of the inside info you need to Gig with the best of ’em at A&M.

There are way too many of these to cover in one blog post, so I’m only going to touch on some of the more well-known terms.

Best Dorm Life: My pick for best dorm life is actually a non-university affiliated dorm, The Cambridge. It offers the freedom of apartment living in a dorm-type atmosphere: numerous group activities, a full-service dining hall, computer labs with free printouts, and even weekly HOUSEKEEPING. Bonus: it’s on the A&M Bus Route!

Best Clubs/Academic Organizations: One of the most widely enjoyed campus organizations is Fish Camp. If you’re an incoming freshman, Fish Camp is definitely a must; you’ll learn everything you need to know to keep you from being a two percenter.

If you’re into running, A&M Roadrunners is a great group. They host weekly club runs, in different areas. The club also participates in several races each year, including the BCS Marathon/ Half Marathon. No experience required!

If you’re a Harry Potter fan, there’s also a…wait for it…Quidditch team. And yes, they’re serious about it. Just ask them.

Best Place to be Quiet/Alone on Campus: The MSC Flag Room is a great place to go if you need some quiet time. Plus, it’s just a really neat, cozy area .A news article on the Flag Room’s grand piano summed up the old 88’s presence perfectly: “Beloved by many spectators, tolerated by a few nap-takers, the MSC piano exudes a cozy feeling, adding to the MSC Flag Room’s reputation as the ‘living room of Texas A&M.’”

Favorite Nonmajor Class: My favorite, favorite nonmajor class was Insects in Human Society (ENTO 322) with Dr. Roger Gold. Not only did Dr. Gold take the class on bug-hunting trips at Lick Creek Park, we also learned the fine art of catching butterflies, made bug collections, and learned how to..uh..cook and eat insects properly. Not only did I learn more than I wanted to know about insects (like that roaches SHED THEIR SKIN), but I had fun in the process!

Best On-Campus Events: A&M is a school of traditions, and Aggie Muster is one of the most cherished. Every April 21st, Aggies gather to pay homage to the Aggie lives lost that year, as well. After a few traditional readings and a keynote speaker, the Roll Call of the Absent begins. As the names are called, a family member or friend of the Absent answers “Here”, and lights a candle in remembrance. The ceremony evokes, in every possible way, the true Spirit of Aggieland.

Transportation: The bus route is the preferred choice of transportation to and from campus. Parking passes are available for purchase, but parking spots aren’t always easy to come by.

Speaking of campus, a caveat: it’s huge, so be prepared. There’s 20 minutes in between classes, and you’ll be using every one to make it to your next class on time, especially if you’re walking from West Campus to Main Campus. Word to the wise: invest in a bike.

Best Gym: The Rec is the go-to gym on campus. It has everything any gym-goer needs, including an indoor rock-climbing wall and the occasional weight room grunter.

Best Food in Town (for students): If you’re looking for a good place to hang out with your friends coupled with good food, good drinks, and a good opportunity to do that load of laundry you’ve been putting off for the better part of 2 ½ weeks, I’d reckon to say that Harvey Washbangers is the place for you. Chow down on some of the (arguably) best burgers in town while you’re waiting on a load of towels to dry? Sounds like a winning combination to me. Let me put it this way, if Harvey Washbanger was a guy, I’d mug down with him.

Best Restaurant to Take Your Parents to When they Visit: Hands-down best place to take your parents when they visit, or, if you’re like me, just yourself, is Caffé Capri in Downtown Bryan. It’s one of my favorite Italian food restaurants I’ve ever been to, and I like Italian food. Reasonably priced and unreasonably awesome.

Entertainment Near Campus: There’s always something going on near campus, but one mainstay that offers year-round entertainment is the Spirit Ice Arena on Holleman. Just wait for that random Tuesday evening when you and your friends have nothing to do and nowhere to be. Trust me, ice-skating is where it’s at.

If ice-skating really isn’t your thing (BOO), head on out to the Brazos Bingo hall and see what it feels like to get your tush kicked by a senior citizen. They show no mercy.

Day Trips Worth Taking: Kyle Field, duh. Aggies are serious about their football, so plan to make game day an all-day event. Wear comfortable shoes, though; students don’t sit down during games.

If chili and Texas Country just aren’t your thing, head on over to Santa’s Wonderland, located just south of College Station on Hwy. 6. With enough exterior lighting to put Clark Griswold’s efforts to shame, Santa’s Wonderland offers the perfect opportunity to enjoy the holiday season and on someone else’s electricity bill. (Open November to January)

Swimming Holes/Green Spaces: Lake Somerville is always a great place to check out, especially during the spring/summer months.

One of my favorite green spaces is Lick Creek Park. Located on 515.5 acres (yes, you read that correctly), Lick Creek Park offers miles of trails, perfect for running, hiking, horseback riding, and even insect collecting, just watch out for those skinless roaches.